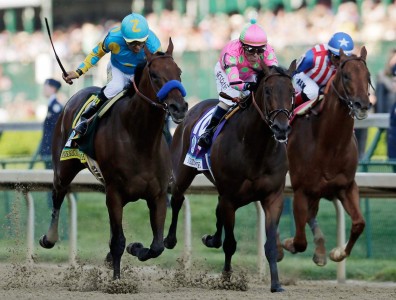 With two Triple Crown Champions having been crowned in the last three years, the comparisons between Justify and American Pharoah have already started. I will state up front that Justify has much more to accomplish to elevate himself above American Pharoah. American Pharoah is the sport’s first Grand Slam winner of American thoroughbred racing (Triple Crown and Breeders’ Cup Classic winner).

It is hard to top that.

But I do think it is reasonable to compare both horses after three legs of the Triple Crown. Since Justify did not race as a 2-year-old, we really need to focus on their 3-year-old campaigns and, more specifically, their Grade 1 stakes races.

As you will see below, except for Justify’s higher Beyer Speed Figure in his final Derby Prep (the Santa Anita Derby) and his time in the sloppy Preakness Stakes, American Pharoah produced better times and speed figures.

Although there have been some grumblings that the 2018 sophomore class is not up to snuff with more recent classes, I think this is a great class — but, admittedly, I don’t think it’s as good as American Pharoah’s in 2015. The 2015 class had better times and/or speed figures at this point of the season. American Pharoah had to battle better talent (in my opinion) in Dortmund, Frosted and Keen Ice.

Justify’s main competition has really come from two colts: Bolt d’Oro and Good Magic. And Bolt d’Oro faded badly in his last start (his first against older foes) — the Met Mile. Perhaps this class would be viewed better had McKinzie not been injured and taken off the Derby Trail. McKinzie was viewed as the early Derby favorite at the time of his injury and Bob Baffert’s best 3-year-old. Perhaps Justify and McKinzie will meet up in the same race sometime in August or September.

What Justify Needs to Do to Rank Above American Pharoah

It is pretty simple to me: If Justify is going to elevate himself above American Pharoah, he needs to become the sport’s first Super Grand Slam Champion of American thoroughbred racing. By this I mean, a Triple Crown championship plus wins in the Breeders’ Cup Classic and the Pegasus World Cup — the latter two races having North America’s largest purses. A win in the Travers Stakes, something American Pharoah did not accomplish, would be nice as well. But Justify has proven thus far that he is the best in this 3-year-old class. He needs to beat the best in the older horse division before he can knock American Pharoah from his throne.

Will Justify be raced that long? Only time will tell. With Justify’s breeding rights sold for a record $75 Million, I wouldn’t count on it. I think we will be fortunate to see him race two more times before he is retired. American Pharoah won eight Grade 1 races in his short career. Justify has four Grade 1 wins to date. Justify needs to race more.

Overall, we can only hope Justify’s ownership group races him in at least three more Grade 1 races for the benefit of the sport. If so, the second half of this year’s racing season will be captivating and give us information for comparing these two great colts. Although this isn’t the Golden Era of horse racing we experienced in the 1970s, it’s feeling pretty close. I feel pretty blessed to see both race live and anxiously await Justify’s next race.

Michael is a pharmacist by profession, author of “Masten Gregory: Totally Fearless” as well as a horse racing blog that can be found at: www.thederbyhandicapper.com. He attributes his love for horse racing to two things: his grandfather who used to listen to horse races on the radio broadcasted from the now defunct Ak-Sar-Ben race track in Omaha, Nebraska and a Sports Illustrated subscription in the 1970s.