Eddie Mac’s Book: Wagering Up at the Spa; Count on Maximum Security at Del Mar

Nobody showed up, and business was booming.

That was the story for the first four days of what will be Saratoga’s strangest meeting in its 157-year history. The New York Racing Association announced that all-sources handle last weekend totaled more than $80.3 million, up more than 9 percent from 2019.

Even with the gates closed to spectators, people can’t get enough of the throwback track. The four cards were a bit light on quality, the inevitable norm since the meet gradually expanded from four to 7½ weeks. But I’ve always said people would bet on a goat race at the beloved Spa. Don’t laugh, I’m serious. 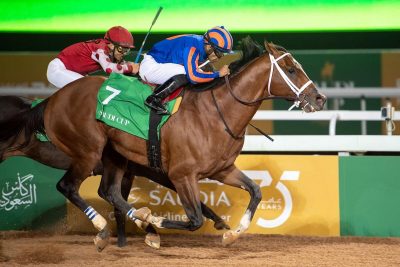 Cashing a ticket or winning a race there is extra special. Atmosphere is crucial, though, and it’s been vaporized by the pandemic. Whether you’re sitting in the old wooden grandstand or hanging out in the back yard near the paddock, there’s no better vibe on a summer day. Racing in front of empty seats is infinitely superior to not racing at all, but something big is missing.

Chad Brown is a heavy favorite to win his fourth training title at a place that means so much to him. He’s a native of Mechanicville, 16 miles south of Saratoga Springs, and as a boy he fell in love with racing on family trips to the Spa.

“It’s really nice to win this race, but definitely a bittersweet day when it’s empty at this beautiful track where I grew up,” Brown said after Country Grammer’s victory in the Peter Pan on opening day. “We’ll try to get through the meet and hold out hope that maybe it will open more during the meet, but there’s no guarantees about that.

“We’ll do the best we can, and we’re grateful they’re running here. Hopefully, this is the only year we have to do this.”

Linda Rice feels the same way. She won the first race of the meet and had four victories, two behind Brown and one behind Christophe Clement, heading into week 2. Success at Saratoga is nothing new to Rice, the only woman ever to take the training title there (2009).

“The horsemen are so happy to be back racing,” Rice said. “But we really miss the fans. It’s just not the same without them.”

The next-best thing to cashing on site is celebrating a winning ticket while playing from your couch. Let’s see if I can help produce a few on Saturday in four stakes races, two at Saratoga and two at Del Mar.

Sistercharlie (5), the 2018 champion older turf female, makes her season debut for Brown in what at first glance appears to be a fairly easy spot. But maybe not.

Yes, she’s 2-for-2 at Saratoga, where she won a Grade 1 last year off a similar layoff. She’ll face only five rivals, one of them her overmatched stablemate North Broadway, entered as a pacesetter for the deep closer. The main danger to Sistercharlie is the versatile, talented Starship Jubilee (6), who’s 17-for-34 on turf, including 3-for-3 this year. Starship Jubilee has won three stakes wire to wire, and if she can set leisurely fractions, Sistercharlie might have too much to do in the stretch. That’s what happened in her last start, the Breeders’ Cup Filly & Mare Turf, when she didn’t get a clear run and finished third as the 4-5 favorite.

The gray blur named Volatile (4) looks like a potential sprint champion for Steve Asmussen, and my gut feeling is he’ll have no trouble in his first graded stakes. He showed star quality last time in an eight-length blowout in the ungraded Aristides at Churchill Downs, and he could have won by a lot more.

He’ll meet only four opponents, and Lexitonian is in over his head, which leaves Whitmore, Firenze Fire and Mind Control. Whitmore is winless in his last five Grade 1 tries, and Firenze Fire is on an 0-for-6 schneid in top company. That leaves Mind Control, a relentless closer who is 2-for-2 at the distance and 2-for-2 at Spa. He’ll be charging late, but I believe Volatile will hold him off.

They’re running again at the seaside track near San Diego after canceling last weekend because 15 of its jockeys tested positive for COVID-19.

Laura’s Light (3) has won three of four on grass for trainer Peter Miller and is the likely favorite. She’s So Special, also trained by Miller, is a solid turf sprinter but unproven around two turns, and she’ll draw plenty of money. I think Florida shipper Cheermeister (6) will be overlooked, and she’s worth a bet at nice odds. She’s 4-for-6 on turf, 3-for-5 at a mile, and faced better fields in Florida. She’s had only one bad grass race, and she had a big excuse after breaking through the gate.

I’ll be playing Cheermeister to win and place and boxing her in exactas with Laura’s Light and Warren’s Showtime (9).

Maximum Security (5), last year’s champion 3-year-old, makes his debut for Bob Baffert after winning eight of 10 for the suspended Jason Servis. The disqualified first-place finisher of last year’s Kentucky Derby is training brilliantly, and if Maximum Security is close to his best form, he’s the winner. He hasn’t run since taking the $20 million Saudi Cup on Feb. 29, but long layoffs rarely bother Baffert horses.

Higher Power (1) has lost four in a row since dominating last year’s Pacific Classic at Del Mar. He’s a likely candidate to fill out the exacta, as is Del Mar horse-for-course Midcourt (6).