C Z Rocket is the 5-2 favorite in a field of nine who will race 6 furlongs with the winner earning an expenses-paid trip back to Del Mar for the Breeders’ Cup in three months.

The weather continues to be beautiful, and Saturday will be no exception, with highs in the mid-70s and a nice ocean breeze expected.

The Bing Crosby has consistently showcased the best summertime sprinters west of the Mississippi and over the years some of the more recognizable names have graced the winner’s circle. Among them are champions Chinook Pass, Lit de Justice, Kona Gold (twice) and Points Offthebench. Agave Racing’s Ransom the Moon won twice in 2017 and 2018.

Last year’s winner, Collusion Illusion, is back for more as the 4-1 fourth choice for owners Dan Agnew, Jerry Schneider, Rodney Orr and MyRacehorse.com.
Trainers Bob Baffert and the late Bruce Headley each own the record for number of Bing Crosby winners with four and jockeys Eddie Delahoussaye. Corey Nakatani and Flavien Prat have each booted home five winners. Prat won four in a row from 2015-2018. Lord Nelson set the stakes record of 1:07.65 when he won in 2016. 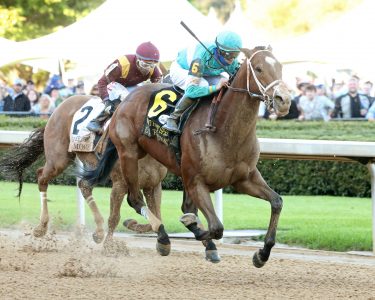 Last year’s BC Sprint runner-up C Z Rocket seeks a return to the winner’s circle after a second-place finish in the Steve Sexton Mile (G3) at Lone Star Park on Memorial Day on what was a very sloppy track under serious storm conditions.Peter Miller trains the son of City Zip for Madaket Stables, Altamira Stables, Gary Barber and Tom Kagele, who has a record of 8-4-1-1 at the distance and won his only race at Del Mar. The now 7-year-old is consistent if nothing else and has won seven of his last nine starts since being claimed for $40,000 15 months ago, and he has some tactical turn of foot, though he’ll probably sit just behind the pace in here. Regular jockey Florent Geroux will be in town to ride.

Collusion Illusion, who makes his first start of 2021 and his first since a third-place finish in the Malibu Stakes (G1) on Dec. 26, hasn’t won a race in three starts since winning this race last year (he was also 12th in last year’s BC Sprint and third in the Santa Anita Sprint Championship behind the favorite here.)

The Mark Glatt-trained son of Twirling Candy certainly likes the distance (5-3-1-0) and Del Mar and if he returns to old form – with a hot pace in front of him to close into – he will be tough to beat. He picks up jockey Tyler Baze for this race as regular rider Flavien Prat chose Grade 1 winner Dr. Schivel.

Dr. Schivel, a 3-year-old son of Violence, makes his second start since winning last year’s Del Mar Futurity (G1) and first since taking a non-winners of two allowance race at Santa Anita in mid-June. He is undefeated in two starts at the distance, and at Del Mar and as a mid-pack runner will only benefit from the probable quick early pace in front of him. Glatt handles the training of the Kentucky-bred for Red Baron’s Barn and Rancho Temescal, and leading jockey Prat will ride.

Glatt also sends out Law Abidin Citizen for Agnew, Schneider or Xitco and the Twirling Candy gelding will look to improve a win in the Oak Tree Sprint at Pleasanton a month ago. He’s another who may want a bit more distance and who also has some good past turf form. Wayne Barnett will be aboard.

Grade 1 winner Eight Rings hasn’t really shown the same kind of spark as he displayed as a juvenile and hasn’t won a race in four starts since the 2019 American Pharoah (G1) 21 months ago, including the Triple Bend last out where he was fourth as the 8-5 favorite.

He’s always a standout trainee in the mornings and enters this event off a series of strong workouts at both Santa Anita and over this course. Though he’s never won at this distance, he’s been exceptional at just a sixteenth of a mile shorter, so the cutback should only help him. The Empire Maker colt is trained by Bob Baffert and will be ridden by Abel Cedillo.

California-bred Brickhouse Ride, who is trained by Craig Lewis, has won five of eight starts at this distance and returns to graded stakes company after winning the Thor’s Echo stakes for state-breds at Santa Anita in mid-June. The confirmed frontrunner has speed to spare and will no doubt play “catch me if you can” after a clean break under jockey Juan Hernandez and if he can hold off his closing rivals, will certainly vie for a larger share of the pot, if not the victory.

MyRacehorse.com and Slam Dunk Racing’s Vertical Threat, who is trained by Richard Baltas, makes his 2021 debut. He won the Mahoning Valley Sprint in November in his previous start.

Trainer Chris Davis brings Dare To Dream’s stakes winner Quick Tempo to California off a win in the Iowa Sprint Stakes at Prairie Meadows a month ago. The 3-year-old son of Tapizar defeated older horses last out and comes back against them again in his graded stakes debut here and in his first start in California.,

Triple Shoot is coming off a nice second in the Triple Bend Stakes (G2) last out more than eight weeks ago, but this late-running son of Competitive Edge seems to like more distance. Trevor McCarthy rides for trainer Pete Eurton.