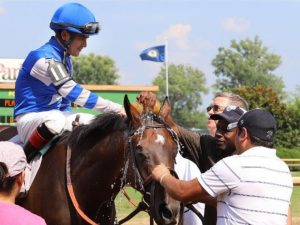 The $2 million Breeders’ Cup Juvenile (G1) on Friday shaped up as a three-horse race among Dennis’ Moment, the 8-5 morning line favorite, Eight Rings, the 2-1 second choice, and Maxfield at 7-2.

Unfortunately, Maxfield won’t be running because of an issue with his right foreleg. Trainer Brendan Walsh discovered the problem Tuesday morning during training hours at Santa Anita.

Jimmy Bell, president of Godolphin USA, the colt’s owner, said: “Terrible timing, but it was really a pretty easy call. It could be something as simple as a bruise in his foot, but what we do know is he’s not running.”

Maxfield had been training brilliantly at Keeneland, where he crushed the Breeders’ Futurity (G1) by 5 1/2 lengths. His sweeping move on the turn was reminiscent of Arazi’s surge in the 1991 Juvenile at Churchill Downs.

Even though Dennis’ Moment and Eight Rings look like standouts in an eight-horse field, each might make a bettor edgy about taking a short price.

Dennis’ Moment clipped heels and lost his rider in his debut before dominating his next two races by a combined 21 lengths for trainer Dale Romans. After Eight Rings took his first race by 6 1/4 lengths for Bob Baffert, the 1-2 favorite in the Del Mar Futurity (G1) ducked in at the start, got bumped and dropped Drayden Van Dyke.

“Very rare that they’re the horses to beat and they both lost their riders,” Baffert said. “In the paddock before the Del Mar Futurity, someone in the owners’ group said the only way my horse could lose is if the jockey falls off. I said, ‘Why would you say that?’ ” 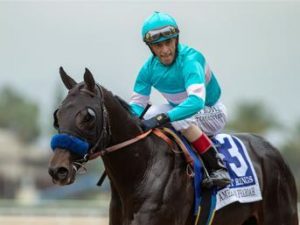 Dennis’ Moment’s recent workout at Santa Anita was spectacular, but he’ll have to outrun Eight Rings, named for Patriots coach Bill Belichick’s eight Super Bowl victories. The son of Empire Maker, a course-and-distance winner, comes in off a six-length runaway at 1 1/16 miles in the American Pharoah (G1).

“I was very impressed with Dale’s horse,” Baffert said, “and after watching him work the other day, he’s the horse to beat.”

Romans appreciates the compliment from his friend and rival, but knows he’s in for a battle with Eight Rings.

“You always have to factor in the Baffert effect,” Romans said. “They sure seem to run well in big races. I said earlier that there are a lot of good things about Eight Rings, but the best thing he has going for him is Bob is training him.”