Some horses love soft ground, others hate it. The great ones can excel even when the footing is against them. The preferred surface of superstar Stradivarius is good to firm, so Thursday’s mushy turf worried trainer John Gosden.

The 6-year-old was going for his third consecutive win in the Ascot Gold Cup, a 2½-mile grind made even more grueling by almost an inch of rain. Before taking Stradivarius down to the starting gate, Frankie Dettori said, “I hope he can swim.”

He could, slogging through the bog with ease. Stradivarius water-skied through the stretch, blasting clear by 10 lengths as Dettori celebrated before the finish. The triumph deserved an ovation, but Ascot’s massive grandstand is deserted because of COVID-19 restrictions. 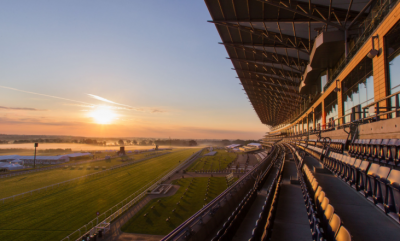 Race-caller Simon Holt saluted Stradivarius as “the greatest stayer in the world.” And one of the best ever. They’ve been running Royal Ascot’s marquee event since 1807, and only Yeats (four, 2006-2009) has won it more often. Sagaro took three from 1975-1977.

“It’s an amazing achievement to win three,” Dettori said after his flying dismount in the winner’s enclosure.

“The rain last night and this morning was against him, but he did it well. Sometimes when the ground is like this, horses die in your hands, but when I pushed the button, he took off. It’s a wonderful feeling.”

The 4-5 favorite scored at Royal Ascot for the fourth straight year, and it was by far his most lopsided Gold Cup. Stradivarius won the Group 1 classic by only three-quarters of a length in 2018 and by a length last year. It was Dettori’s eighth Gold Cup trophy.

“He beat the ground today,” said Gosden, who was so concerned about the conditions that there was speculation he might scratch him. “He’s beaten some proper horses before, and he did it again today. He has the heart and class to win on any ground.”

There was serious buzz and lots of money for mud-loving Technician, the 4-1 second favorite. He tracked Stradivarius until early in the stretch before packing it in. Technician backpedaled to seventh of eight, 29¾ lengths behind.

“I was surprised at the half-mile mark when I looked around and saw everyone else was in trouble,” Dettori said. “He’ll go down as one of the great stayers, like Yeats and Sagaro. He’s been a joy to be around. Who knows, maybe we’ll try for four next year.”

A year ago, Hayley Turner became the first woman since 1987 to ride a winner at Royal Ascot when she took the Sandringham Handicap on 33-1 shot Thanks Be. Turner repeated in the Sandringham on yet another 33-1 shot, Onassis, who like Thanks Be is trained by Charlie Fellowes.

“It’s still great to have a Royal Ascot winner whether people are here or not,” said Turner, who received a standing ovation last year. “We don’t want a female winning at Royal Ascot to be a special event, we want it to be a common occurrence.”

Onassis defeated Waliyak by 1¼ lengths to deny trainer Roger Varian his fourth victory of the afternoon. He has four at the meeting … Jim Crowley rode his fifth and sixth winners, moving within three of the modern record set by Ryan Moore in 2015. (In 1878, Fred Archer won 12). Crowley entered the week with only five Royal Ascot victories.