Art Collector came through with a masterpiece in the $600,000 Toyota Blue Grass Stakes (G2) at Keeneland on Saturday, rolling past the filly Swiss Skydiver near the eighth-pole and cruising to a 3 ½-length victory.

Sent off as the second choice just behind slight favorite Swiss Skydiver, Art Collector stamped himself as a Kentucky Derby (G1) contender by earning 100 qualifying points to move onto the leaderboard at No. 4.

The 3-year-old colt extended his winning streak to three in a row and prevented Swiss Skydiver from becoming the first filly to win the 1 1/8-mile Blue Grass. 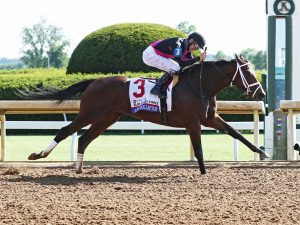 After winning a pair of allowance optional claimers at Churchill Downs for trainer Tom Drury, the decision was made to move into the top echelon, and Art Collector came through under Brian Hernandez, Jr.

“If you go back and watch all his replays, he’s just a very athletic horse. I think one of the most impressive races he ran was the day at Churchill he got shuffled around and almost fell down,’’ Hernandez told the Keeneland press office. “I almost pulled him up, but he ran again. From that day on, we always believed he was a really good horse. It’s been a fun ride.”

Already atop the Kentucky Oaks points leaderboard, Swiss Skydiver earned 40 points for her second-place finish and ranks 13th on the Derby points list. Rushie finished third to earn 20 Derby qualifying points, and Enforceable was fourth for 10 Derby points (No. 12 on Derby leaderboard with 43 points).

“She ran super,’’ trainer Ken McPeek said. “Art Collector was the horse I was worried about. He is obviously really good and really talented right now. I thought if she was going to get beat, it would be by him. I am happy for Tom Drury. He works hard, and he has been at it a long time.”

And now it looks like Swiss Skydiver will be pointed to the Oaks.

“We might lean against going to the Derby,’’ McPeek said. ‘We might go to the Alabama and consider waiting for the Kentucky Oaks.”

The race unfolded as expected with Shivaree taking the early lead and Swiss Skydiver and Art Collector in pursuit through a first-quarter in 23.25 seconds. The filly, ridden by Mike Smith, moved into the lead after a half mile in 46.61 and still led after three-quarters in 1:10.63, with Art Collector in second.

Entering the stretch, Art Collector moved past the filly and won easily, returning $6.60 for a $2 win bet. The victory was the first Grade 1 for Drury and the biggest win of his nearly 30-year training career, mostly at smaller tracks in Indiana, Kentucky and Ohio.

“It’s been a little bit of a roller coaster ride,’’ Drury told the Keeneland press office. “Everybody was fighting the same thing with COVID-19 and the uncertainty. I’m at a loss for words. It takes a village to get these things; there’s a lot of people who have done their part. I’m just honored to be able to share this with my staff and everyone that worked to get him here.”

The Blue Grass, postponed from its usual April date when Keeneland’s spring meet was canceled due to the coronavirus pandemic, still serves as a key prep for the Derby, now scheduled for Sept. 5 as the second leg of the Triple Crown.

Attachment Rate was fifth, followed by Mr. Big News, Finnick the Fierce, Tiesto, Hard Lighting, Basin Shivaree, Hunt the Front, and Man in the Can.

Art Collector, owned by Bruce Lunsford, has won four of eight career starts with earnings of $548,475. A son of Bernardini, the bay colt was first trained by Joe Sharp, and then moved to Rusty Arnold, but drug issues and travel problems led the Drury – based at Skylight Training Center near Goshen, Ky. _ has been training horses for nearly 30 years, mostly at small Midwestern tracks in Indiana, Kentucky and Ohio.

In other results at Keeneland:

Speech ($10) took charge in the stretch for a three-length victory over 3-5 favorite Venetian Harbor in the Ashland Stakes (G1) for 3-year-old fillies at 1 1 1/16 miles.

Trained by Michael McCarthy, the filly earned 100 Kentucky Derby Oaks (G1) qualifying points to move to No. 2 on the leaderboard with 160 (the Oaks is Sept. 4). Envoutante, trained by McPeek, finished third in the five-horse field.

“To come back today and think we would set a track record in a race we weren’t especially pointing to says something about Speech,’’ McCarthy said. “She trained well. She shows up every time. I call her the ultimate overachiever.”

Guarana ($3) topped Mia Mischief by a half-length to give trainer Chad Brown the 100th Grade 1 victory of his career. Jose Ortiz was aboard the

“It’s right up there near the top. It’s a whole body of work from 12½ years now of training,’’ said Brown. “It has to do with my team of co-workers, owners and horses both present and past. They all contributed to the 100 Grade 1s. God willing if everything stays intact, we’ll work on the next 100. But we’re going to enjoy this for now.”

Rushing Fall ($3.60), the 4-5 favorite trained by Chad Brown, caught Jolie Olimpica at the eighth-pole and won by three-quarters of a length under Javier Castellano. Winning time for the 1 1/16 miles on the turf for fillies and mares 4 and up was a course record 1:39.02.

“She’s the type of horse that she doesn’t have to be on the lead,’’ Castellano said. “Today it worked out great. I could keep track of the front runners. The way she did it is amazing. She’s a really nice filly.”

Enola Gay ($12.60) nosed out Walk in Marrakesh in the final jump to take the 32nd edition of the one-mile turf race for fillies and mares 3 and up. The 3-year-old daughter of Uncle Mo was making her first start of 2020 for trainer Shug McGaughey.

Leinster ($22.40) won by a head over stablemate Totally Boss in the 5 ½-furlong turf race for 3-year-olds and up. Favorite Wildman Jack trailed from the start and finished last of 13 starters.

Monomoy Girl continued her comeback by drawing away from Vexatious for a two-length victory in the Ruffian for fillies and mares 4 and up – the champion’s first stakes win since 2018.

Now a five-time Grade 1 winner, Monomoy Girl – trained by Brad Cox and ridden by Florent Geroux, took command after three-quarters of a mile and won in 1:34.13.

“She’s a very special filly,” Cox’s assistant Dustin Dugas told the NYRA press office.  “She showed up and ran well. She did everything we asked of her. She had a good week here.”

“I think she’s a little better mentally. She’s relaxed more throughout the race,” Geroux, who has ridden the Monomoy Girl to 10 of her 11 wins, said. “Before that, when she was a 3-year-old and won the Breeders’ Cup, she had a tendency to be a little keen even when she was laying second or third. She’s a bit more relaxed now that she’s older and a little bit more composed before the race, after the race and during the race.”