The $500,000 Met Mile (G1) on Saturday is a classic West Coast versus East Coast confrontation

From California comes McKinzie, a four-time Grade 1 winner with over $3.4 million in earnings for Hall of Fame trainer Bob Baffert.

And in this corner, from right here at Belmont Park, hails local hero Code of Honor for another Hall of Famer, Shug McGaughey. 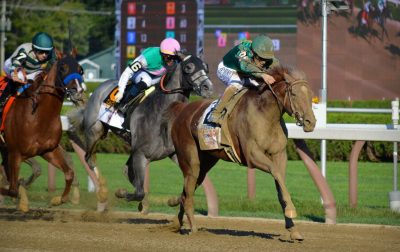 Add in Hog Creek Hustle, Mr Freeze and Warrior’s Charge — a trio of worthy challengers from the Midwest — and you’ve got the makings of an outstanding coast-to-coast race.

But then, a brilliant contest is the rule rather than the exception in the Met Mile.

The venerable race, first contested in 1891, was the traditional Memorial Day feature at Belmont. The New York Racing Association in its wisdom (?) moved the Met Mile from its usual calendar spot to the Belmont Stakes undercard in 2014.

That’s a trend we see throughout racing, the consolidation of multiple major stakes to create one blockbuster program. The economics must work because they all do it. The downsides are the gaping holes in the stakes calendars before and after the “big days.”

In a twist of fate dictated by this coronavirus-shredded season, the Met Mile once again tops a Belmont holiday card, now anchoring Independence Day instead of Memorial Day.

The race has always been the right event at the right time of year. The one-turn mile attracts a compelling cross section of sprinters trying to carry their speed an additional furlong or two, classic milers and stars from the handicap division shortening up for the challenge.

Let’s start with the handicap headliners in the field of eight: McKinzie and Code of Honor.

McKinzie, the 2-1 morning-line favorite, could stamp his name in the record book as the first North American-based male to win Grade 1 stakes at 2, 3, 4, and now 5.

He is no stranger to Grade 1 victories on this coast with wins in the 2018 Pennsylvania Derby and last year’s Whitney at Saratoga.

The 2019 Met Mile is one that Baffert would love to rerun. McKinzie, was bottled up in traffic and checked repeatedly through the stretch run. It was a rare instance when “Big Money” Mike Smith didn’t work his magic.

McKinzie sprung free too late, splitting rivals in deep stretch to finish second, only three-quarters of a length behind Mitole.

McKinzie closed out the 2019 campaign with a runner-up finish in the Breeders’ Cup Classic (G1).

It’s been a mixed bag this season with a no-factor performance in the Saudi Cup (G1) and a win in the seven-furlong Triple Bend Stakes (G2) at Santa Anita.

“His comeback race was just perfect,” Baffert said of the Triple Bend. “If he brings his ‘A’ game, that’s what we’re looking for.”

The Met Mile offers a Breeders’ Cup Classic rematch of sorts with Code of Honor who was up the track in his journey to California.

Now 4, Code of Honor notched a pair of Grade 1 victories last year: the Travers on his own merits and the Jockey Club Gold Cup when the stewards took down Vino Rosso’s number.

McGaughey has taken a cautious approach with Code of Honor’s comeback. His lone appearance this season was a game win in the Westchester Stakes (G3) here last month.

“He acts like he’s ready to run,” McGaughey said. “He’s had plenty of time off over the winter and it seems to have done him some good.”

John Velazquez, a five-time Met Mile winner, will be aboard the 3-1 third choice on the morning line.

When searching for the true milers in the race, you quickly land on Mr Freeze (8-1), who is 2-1-0 in three starts at the distance with wins in the Ack Ack Stakes (G3) at Churchill Downs and the Gulfstream Park Mile (G2).

He was third most recently at the 3-1 favorite in the nine-furlong Oaklawn Handicap (G2).

Vekoma, the 5-2 second choice, guarantees plenty of pace in the race following his career-best victory by 7 ¼ lengths in the seven-furlong Carter Handicap (G1). He will likely have company on the front end from Warrior’s Charge (12-1), who needs the lead to be effective.

The winner secures an automatic berth in the Breeders’ Cup Dirt Mile (G1) in November at Keeneland.