Suburban Stakes: Catholic Boy Converts Back to Dirt From Turf 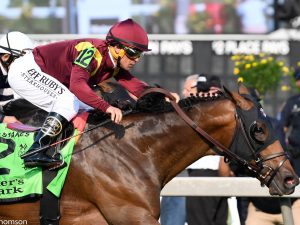 Versatility is a prized asset in a racehorse. Very few runners can seamlessly shift from turf to dirt, and back again.

For Catholic Boy, any surface will do just fine. That versatility makes him the horse to beat Saturday’s $700,000 Suburban Stakes (G2) at Belmont Park…

The Suburban is the top main-track attraction of Belmont’s Stars and Stripes Racing Festival. The 11-race card includes a pair of 3-year-old grass stakes: the $1 million Belmont Derby (G1) and the $750,000 Belmont Oaks (G1) for the fillies.

The Suburban is the 10th race. While the last stakes on the card, it is far from the least interesting, especially with Catholic Boy bidding for a mark of distinction.

A victory in the Suburban would give the 4-year-old a graded stakes win on both turf and dirt in every racing season.

At 2, he posted a grass win in the With Anticipation (G3) at Saratoga before closing out the campaign with a dirt score in the Remsen (G2) at Aqueduct.

Last year, Catholic Boy scored consecutive Grade 1 victories on alternating surfaces. He pulled out a game win by a head in the Belmont Derby before heading to Saratoga to take the Travers by four impressive lengths.

He already has a 2019 turf stakes in the bank: the Dixie (G2) on the Preakness undercard in his season debut.

“It would be a pretty remarkable addition to his resume,” trainer Jonathan Thomas said of the mission to win stakes on both surfaces three years running. 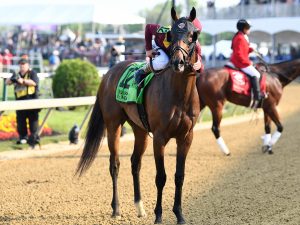 And that was by design.

“We wanted to give him time off, not because of any injuries,” Thomas said. “He came back great and we were really happy with his effort in the Dixie. Subsequently, he’s trained well. He’s always been a clockwork horse in the sense that he’s very reliable and consistent.”

Hall of Famer Javier Castellano will ride the 9-5 morning-line favorite.

For those looking for a longer price, Pavel at 8-1 offers intriguing value. The gray 5-year-old is making his second straight start at Belmont for the California-based team of trainer Doug O’Neil and jockey Mario Gutierrez.

Pavel, like seven other rivals, had no shot against the relentless Mitole most recently in the Metropolitan Handicap (G1) on the Belmont Stakes undercard.

This should be a more favorable situation on several levels. The 1 ¼ miles is more Pavel’s game as opposed to a flat mile and the competition level isn’t as deep.

This is also the first time since February of 2018 that he makes consecutive starts at the same track. Since then, the well-traveled horse has competed in Dubai (twice), Japan, Santa Anita, Del Mar and Churchill Downs.

Perhaps this time familiarity will breed success for the richest money earner in the field with over $2 million in the bank.

The Suburban is one of the most venerable fixtures on the New York stakes calendar. It was first contested in 1884 at the long-departed Sheepshead Bay Race Track and was a Grade 1 fixture until a downgrade in 2009.

The roster of past Suburban winners has few rivals. The race has been won by such notables as Tom Fool, Kelso, Forego,  Dr. Fager, Nashua, Assault, Buckpasser, Invasor, Mineshaft, Skip Away and Foolish Pleasure.