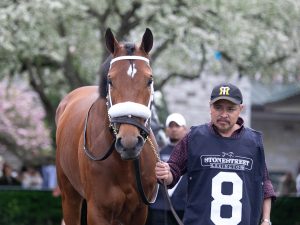 Rupp Racing’s Owendale represents one of the “new shooters” in the Preakness Stakes after not earning enough points in the Road to the Derby points system, despite his impressive Lexington Stakes win at Keeneland. Trainer Brad Cox has always said the Preakness Stakes was the goal for the Into Mischief colt and he’s set to ship the colt to Baltimore early next week.

Pimlico will mark the sixth track in his ninth start, so he’s well-traveled, and he’s steadily risen in company with success, though his only sub-par performance really came in the Risen Star Stakes three months ago where he finished behind Derby winner Country House and Preakness rival War of Will after a very wide trip throughout. Regrouping and not chasing the Derby was probably best for the horse and now he’s a strong candidate for a minor Preakness Stakes upset.

Regular rider Florent Geroux will be back aboard the bay colt, who judging by his pedigree should have no trouble with the extra furlong, and currently carries early odds of 10-1.