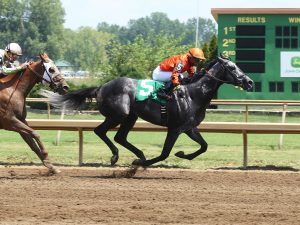 It’s far from his first career top-level appearance, though. The 24-year-old is currently the leading rider in his homeland and has collected more than 1,200 victories since he first started riding in 2012, including multiple top-level races in Peru. He plans to stick around and become one of the top jockeys in America.

With a recommendation from retired jockey Ramon Dominguez, as well encouragement from fellow-Peruvian rider Edgar Prado, Chuan first arrived here seven years ago fresh out of the La Escuela de Jinetes Jorge Bernardini Yori jockey school as a 16-year-old apprentice. He returned a few times, but his career took off back home in Peru where he won just about every major race in the country.

Dale Romans, who trains Everfast, took Dominguez’s advice and decided to give Chuan – whose agent happens to be Romans’ son, Jake — his big chance.

Recently, US Racing caught up with Chuan for a brief Q&A:

Q: When did you start riding?

Q: Your biggest wins so far?

Q: What big race would you like to ride in?

A: The Kentucky Derby.

Q: How does it feel to be riding in America?

A: It’s my dream come true, it’s really what I always wanted.

Q:  Did you already know about the Travers?

A: Of course I knew about the Travers, but I never imagined running (in) it. It is known worldwide and I have had the opportunity to watch it but only televised.

Q: How do you feel about the No. 5 post position?

A: Five is my lucky number, so that’s good for me. I’m happy.

Q: How will you prepare for what could be a very special day in your career?

A: I am calm and concentrated. I also watch(ed) videos of Everfast’s previous races.

Q: What plans do you have for the rest of the year?

A: My plans for the future is to be one of the USA’s best jockeys. I hope to finish this season winning many races.

Q: Do you plan to stay in the United States? When did you first arrive?

Q: Who has been the horse that you liked to ride the most, and what can you tell us about Everfast?

A: Cascanueces. She is a mare who was a champion in Peru when she was 2 years old. Everfast is a horse which any jockey wants to ride because he has a strong finish.

Q: There are many jockeys from Latin countries who succeed in North America. How it feels to carry your flag to the national horse racing stage?

A: I am sincere when I say I admire the jockeys here, I feel excited to ride by their side. This was my dream and now I will make it happen, just like Prado, Alan Garcia, Rafael Bejarano, Jorge Chavez, Miguel Mena, among other Peruvian jockeys. I will strive to make our Peruvian school stand with a good name.