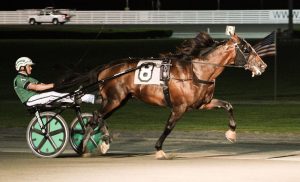 Fall is in the air and with it comes the next wave of big races in harness racing.  On tap this weekend are the second legs of both the Trotting and Pacing Triple Crowns, when Yonkers Raceway plays host to the Yonkers Trot and Messenger Stakes, respectively.

The Yonkers Trot features Hambletonian winner Forbidden Trade, the Canadian-bred who at 15-1 beat the heavily favored Greenshoe in the Hambo final.  Greenshoe is not in the Trot field, but Gimpanzee (third) and Osterc (ninth) are. Therein lies an issue with harness racing. In thoroughbred racing, when a horse is 2 years old, the connections have to make the decision to nominate it to the Triple Crown. If you think your horse has even a snowball’s chance in hell, you pony up the less than four figure fee. The fee makes you eligible for the Kentucky Derby, the Preakness and the Belmont Stakes.

Harness racing is different.  There are different sanctioning bodies — the Hambletonian Society, the Grand Circuit and the individual tracks. It’s a few hundred dollars here, another few hundred there and that’s not to mention the transportation costs of getting your horse to and from each track.

As a fan, you wish there could be unity, so a Greenshoe could run in all three Triple Crown trots, but that’s simply not the case. That said, the words leg and Triple Crown resonate and both races will be good ones.

Why is the Yonkers Trot race worth watching? For starters, the Hambo winner is in, and that alone gives it some clout as well as star power. The driver of the Hambo winner is Bob McClure, who at age 27 is just starting to come into his own on the big stage after spending years on Canada’s smaller circuits.

Second is the track. Unlike the Hambo, which was run on the one-mile Meadowlands oval, the Yonkers Trot is contested on a half-mile circuit. That alone throws different variables into the equation. The race to the first quarter, the ability for the leader to slow things down in the second quarter are all important factors on half-mile tracks, especially Yonkers, which doesn’t have a passing lane.

Third is Gimpanzee. He’s a good horse and was the second choice behind Greenshoe in the Hambo final. You can make the argument that on paper, he’s the better horse but the grit showed by Forbidden Trade when it looked like Greenshoe was going to fly by was more than impressive. If both horses run their best, Gimpanzee may be the one.

Fourth, a Triple Crown is on the line, and unlike thoroughbred racing, harness racing doesn’t quite have the same impact in trying to sell its Triple Crown attempts.

There have been nine Trotting Triple Crown winners, the most recent Marion Marauder in 2016. The third leg will take place at The Red Mile in October in the Kentucky Futurity. Of course, if Forbidden Trade does take the Trot there are no guarantees that the colt runs in Lexington. In fact, the Yonkers Trot was not on the radar but trainer Luc Blais said that the colt was training so well, he had to change the plans and bring him to Westchester County.

The Messenger Stakes is the second leg of the Pacing Triple Crown. Unlike the trotters, the most famous pacing race of them all is the third leg, the Little Brown Jug, which will be run on Thursday, Sept. 19 at the Delaware Fair Grounds in Delaware, Ohio. The first leg, the Cane Pace was run at The Meadowlands on the Hambo undercard and was won by Captain Crunch, who beat Bettor’s Wish by a nose. Unfortunately, The Captain is not entered so there will be no Pacing Triple Crown winner in 2019.

Why is the Messenger worth watching? Like the Yonkers Trot, the track does make a difference, particularly in paces. Many times, the race to the first quarter is ferocious; whoever gets there can try to wire the field and because pacers go faster, it can be tough to make up ground in the tight turns at Old Hilltop. Will we see the horses gun it for all four quarters or we will see a 26.2 blast and then a 30 second second panel?

Second is Bettor’s Wish. After winning the Art Rooney Pace at Yonkers in the spring, he narrowly missed in the Meadowlands Pace, the richest race for pacers in the United States and then, narrowly missed in the Cane; is this his time to shine? His connections certainly think so.  Because he wasn’t nominated to the Messenger, he was supplemented in for $30,000. If that doesn’t give us an idea of the colt’s fitness, then nothing will. He should be the heavy favorite come post time; the only Cane runner in the field is Escapetothebeach, who finished seventh.

Third is trainer Tony Alagna. The 45-year-old has three horses in the field, so there’s a 3 in 8 chance he may indeed visit the winner’s circle, but his trio will have their work cut out for them.

Fourth are the drivers. Unlike other stakes races where drivers come in to drive, all the drivers in the Messenger are part of the Yonkers colony, so every nook and cranny of the track is accounted for by this bunch. It will be interesting to see which horse Jason Bartlett ends up on; take note of that if you decide to plunk down a buck or two.

The Messenger runners come in with a race under their belts as eliminations were run last Saturday. They were won by Bettor’s Wish, who starts from the one post, and Aflame Hanover, who drew the always concerning eight post for the $500,000 race.

The field, with horse, driver, trainer

4 US Captain, Bartlett (he will choose), Tony Alagna

Two races, two legs, totaling $1 million will be in the books late Saturday as Old Hilltop takes a turn in the harness racing spotlight.