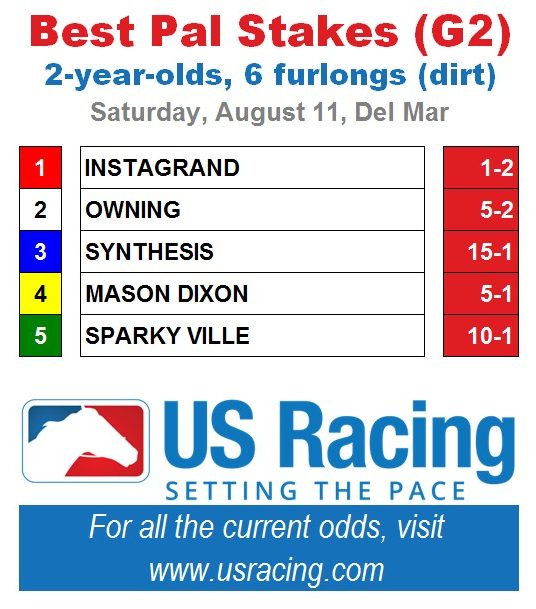 Saturday’s $200,000 Best Pal Stakes (G2) at Del Mar is the first main graded stakes event for 2-year-olds in Southern California and also a first glimpse into the future star quality of the juvenile crop racing in the Golden State and, perhaps, a first look at an eventual Breeders’ Cup Juvenile (G1) runner or even Kentucky Derby (G1) winner.

Like its filly counterpart, the Sorrento Stakes (G2) run last week, the distance of the Best Pal has been cut back in distance to six furlongs from the previous multiple-year stint at 6 1/2 panels, mostly thanks to the lack of races run in progressive distances and a changing racing climate in Southern California.

Regardless of distance, whoever wins will claim the title as the circuit’s division leader and early favorite for the Sept. 3 Del Mar Futurity. The Best Pal was run as the Balboa Stakes for more than 20 years and over varying distances until 1995, when it was re-named for eventual Hall-of-Famer Best Pal, who won the race in 1990 on his way to victory in the Del Mar Futurity and a runner-up finish in the Kentucky Derby the following year.

In addition to the Balboa, Best Pal won the inaugural running of the Pacific Classic (G1) in 1991, and also the Hollywood Gold Cup (G1) and Santa Anita Handicap (G1) during the course of his 47-race career, sweeping the three big events for handicap stars in Southern California. He won 17 stakes races overall, nearly all of which were contested in the Golden State.

Best Pal was sent to his birthplace, Golden Eagle Farm in Ramona just miles from Del Mar, upon his retirement in 1996 after a six-year career. After two years of well-earned rest and relaxation followed by a happy job accompanying young 2-year-olds to and from the track, Best Pal laid down and died unexpectedly at age 10 while on the job. The cause of death was reported to be a heart attack, but anyone who saw him run knows there was nothing ever wrong with the big brown gelding’s heart. The humbly bred son of Habitony currently rests under a 600-year-old oak tree, where what remains of Golden Eagle is located today.

None of the five headed postward in the Best Pal this year are Cal-breds, but all carry some impressive resumes already in their burgeoning careers. 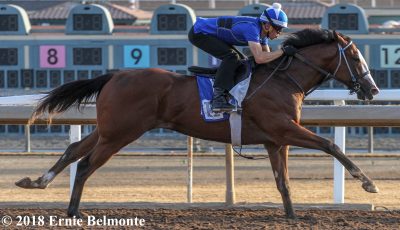 OXO Equine’s Instagrand, a $1.2 million son of Into Mischief, broke his maiden by an easy ten lengths at Los Alamitos in late June in an impressive :56 for the five furlongs, and will certainly be the post time favorite despite his less-than-ideal innermost post position. Hard to tell what kind of running style he’ll have off the one win, but he figures to get a similar trip under Drayden Van Dyke. He has some nice works over the track and is in the competent care of Hall of Famer Jerry Hollendorfer. He’s been the “buzz horse” since his maiden win and now gets the chance to turn the buzz into a dull roar heading into the preps for the Breeders’ Cup Juvenile at Churchill Downs in November.

“He’s been doing great,” Hollendorfer said. “He’s improved in all of his works and now he’s going to run against good colts in a big race here.

“I don’t know if we chased anybody away [from the race]. I just feel that the ones that are running, their trainers feel they’re ready to go now.”

Trainer Simon Callaghan, who won this race a year ago with Run Away, is back with Paul Reddam’s Owning, a $260,000 son of Flashback who broke his maiden in fine fashion at Los Alamitos a month ago. This colt has been working well since, with three nice drills over the Del Mar surface and, in his debut, he showed he’s a stalker, which will help in this race, which appears to be overloaded with speed. Reddam’s go-to rider Mario Gutierrez will be aboard and while the favorite it a tough customer, any improvement off his debut figures makes this one tough.

One who will love a nice pace and who showed some exceptional maturity to come off the pace and break his maiden is Great Friend Stable, Hornstock and Kahet’s Mason Dixon. The Doug O’Neill-trained son of Dixie Union was wearing a $150,000 claiming tag in his debut, but the race wasn’t much different than a straight maiden, aside from a slightly smaller purse. He will have leading rider Flavien Prat aboard and also a nice outer post, which will help to get any kind of position they want depending on the early pace.

Del Seco DCS Inc.’s Sparky Ville is the last foal out of the Storm Cat mare Lorelei K and broke his maiden in his second start under Gary Stevens — and the Jeff Bonde trainee looked super in doing so. He has had trouble in both starts, probably more related to his age than bad luck, and still showed great talent and maturity. He earned some strong figures in both of his starts and his outside post is advantageous for his Hall of Fame pilot to gauge the pace and also to keep him free of any potential trouble. He doesn’t need to improve much to be a factor and his works over the Del Mar track indicate he’s ready to move up to this level.

Synthesis is the lone maiden here and everyone knows to not count out a promising maiden from the Keith Desormeaux barn, especially when his brother Kent is in the irons, as is the case Saturday.

The Best Pal is the day’s third race with a post time of 3:03 p.m. PT. It’s supposed to be warm and humid again in Del Mar, with highs in the mid-80s, and the track will be fast all day.