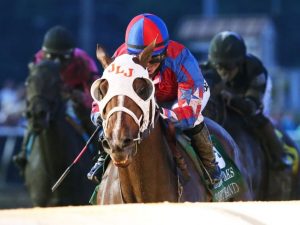 Sophie Doyle has every reason to be protective of Street Band. She knows that by taking good care of her, the 3-year-old filly just may take her back to the Breeders’ Cup.

“No one else works her,” said Doyle, Street Band’s regular rider who will be back aboard the Larry Jones-trainee when they compete in the $1 million Cotillion Stakes (G1) on Saturday at Parx Racing as part of the stacked Pennsylvania Derby Day card.

Doyle is the most recent female rider to have a Breeders’ Cup mount, having piloted Fioretti to a 13th place finish in the 2015 Filly & Mare Sprint (G1). Street Band and Fioretti are the only graded stakes winners so far for the British-born and raised jockey, so on Monday she was in her customary role in the irons when the Indiana Oaks (G3) winner breezed five furlongs in 1:00.60 at Churchill Downs in her final Cotillion tune-up.

“I’ve only had one other graded stakes horse and they’ve been years apart from each other, so you can imagine that when these opportunities come for me, I’ve got to grab on with both hands and make every opportunity count,” said Doyle, who is based at Arlington Park this meet. “If that means driving five hours down to Kentucky and back to Chicago to work her in between races here at Arlington, then so be it. It’s worthwhile.”

The multiple graded stakes-winning Street Band, owned by breeders Cindy and Larry Jones and Ray Francis and the recently added Medallion Racing, certainly has her quirks and can be headstrong. Doyle has solved the riddle of how to get along beautifully with the winner of the Fair Grounds Oaks (G2).

“She’s been so particular, and Larry always has his jocks come in and work his horses. We’re all a team. She’s just very, very particular and right now her exercise rider, George, has done a tremendous job with her and his brother, Tony, ponies her so they deal with her a lot in the mornings. It’s a real team effort,” said Doyle. “She can be pretty keen in her works and get pretty excited. Sometimes a horse can go too fast or anything can happen. They’re athletes so you just never know. At this moment in time of her career, it’s a risk I’m not willing to take. Larry is acceptable to that and he’s happy that I come all the way down and do the best I can with her. Right now, it’s paying off and we’re getting results.”

Those results include getting the daughter of Istan out of the Street Cry mare Street Minstrel to settle in her races. That tactic will have to come into play in the Cotillion, which shapes up as the saltiest race of the year for horses of her age and gender since the Kentucky Oaks (G1). In fact, Oaks winner Serengeti Empress is in the field of 11, along with three multiple Grade 1 winners – the undefeated Guarana and 9-5 early favorite from Chad Brown’s barn, California invader Bellafina, and reigning 2-year-old filly champion Jayhawk.

“They’re not going to make it easy for my filly, absolutely not. I’d say this will probably be her most competitive bunch, perhaps since her run in the Kentucky Oaks, but there were so many horses in that one and they were all very classy fillies. This is almost like a smaller version of a rematch for them,” said Doyle.

Last time out, Street Band and Doyle finished third in the Alabama (G1) in the Saratoga slop. The Alabama is the key Cotillion prep as seven of its last 10 winners have come straight out of the Alabama. That may prove an advantage to Street Band but there is no doubt that the cut back from the 1 ¼ miles of the Alabama to the 1 1/16 miles of the Cotillion will be of benefit. That is the distance where she has fared best, winning three of five starts, including the Fair Grounds Oaks and the Indiana Oaks.

“She’s run some really nice races at the distance and ever since we stepped her up from the 5 ½ furlongs when I started riding her at the Fair Grounds to the mile and she got the hang of running that sort of distance, she’s really moved up to the performances that she’s been able to give,” said Doyle.

Despite that third place finish in the Alabama on Aug. 17, Doyle was impressed with the filly’s effort.

“As we’ve seen from her so far, she’s keeps delivering as best as she can. She didn’t have one of the best wet track numbers but on the muddy track she managed to overcome that, and she really prevailed throughout the mile-and-a-quarter trip,’’ said Doyle. “I think coming back to a mile-and-a-sixteenth will be a really big key for her. She has a nice turn of foot that we can use over that sort of distance.”

The Cotillion field is loaded with blistering speed and Doyle is pleased they drew post 3 because Street Band doesn’t need to be at the front.

“The post will give us a chance. Serengeti, she has one style of running. I’ve already run against her multiple times so I’m very used to how she runs her race. Jaywalk will be right there with her. We’ll be able to play our game and set up where she’s happy, but if we want to be a bit more forwardly placed we can and if we want to play it by the break and let that take our position that will be in the middle of the pack, that will be fine for her,” said the rider.

“The big key with Street Band right now is that she’s learned to settle. That’s been a topic of mine that I’ve been working on with her since the first time I started riding her. I’ve wanted her to be able to do that as we’ve been going into the more competitive races. That’s become the key for her, to be able to do this,” she continued. “Right now she’s really coming around mentality-wise. She’s settled down. I’m really hoping that she settles nicely and gives us the race that I know she can perform to.”

If Street Band can do just that, she’ll earn her spot in the $2 million Breeders’ Cup Distaff at 1 1/8 miles at Santa Anita on Nov. 2. The Cotillion is a Breeders’ Cup Challenge “Win and You’re In” race

“There’s a lot at stake here. This will be a real test for everybody and I’m pretty sure that nobody will be giving anyone an inch, especially with the grade one, the prize money, and the ultimate goal being a trip to the Distaff,” said Doyle. “It would be fantastic to get back to the Breeders’ Cup, which was the first big meeting that really caught my eye of American racing when I saw it on TV many, many years ago when I was a little girl in England. It captured my heart.”

Doyle, 33, is the daughter of renowned former British trainer Jacqueline Doyle and the older sister of James Doyle, who has been a contract rider for Godolphin since 2014 and is the winner of more than 20 international Grade 1 events. At the 2015 Breeders’ Cup, James Doyle was third on Birchwood in the Juvenile Turf (G1).

“It was very cool to ride at the same Breeders’ Cup with James and it would be very nice to do it again. And if we could both end up in the same race together that would be absolutely fantastic,” said Sophie Doyle. “It would be wonderful to be another set of siblings riding at the big meet like Irad and Jose Ortiz.”

But first, Street Band (8-1 on the morning line) has to take her into the Parx winner’s circle Saturday.

“She’s there with every chance. Of course, Guarana is the one to beat but as we know in horse racing anything is possible and no horse is unbeatable,’’ she said. “But you have to play your cards right, be tactful enough, and you have to be really aware of what’s going on in the racing around you and how you ride your race. There will be a lot of plan A, plan, B, plan C and plan D going on. That’s what takes in these big races to get the big results.”