Dirt route races are just one of the many facets of racing in New York at this challenging time of the year. Handicappers who understand the differences between horses that excel in two-turn races at Saratoga as opposed to one-turn races at Belmont will enjoy a strong betting advantage in those races throughout the month July. The other horseplayers out there who fail to sufficiently acknowledge this enormously important difference between Belmont Park and Saratoga, on the other hand, will struggle badly.

One of Saratoga’s long-standing nicknames is the “Graveyard of Favorites” and the track has that reputation for a number of reasons. Much of it has to do with the fact that bettors get the odds all wrong in route races by misinterpreting horses’ one-turn route form from Belmont — either better than it really is, or worse — when handicapping races on Saratoga’s totally different two-turn layout.

Two-turn route races have always been a big element of handicapping at Saratoga, unlike at New York’s bookend race meets at Belmont Park which have almost no two-turn route races. Saratoga on the other hand cards roughly 40 two-turn dirt routes a season — an average of about one per day — and those events are quite different than the dirt route races run around one turn at Belmont Park. Plus, when it rains a lot you can expect even more dirt routes at Saratoga due to all of the races moved from turf to dirt. In 2014, for example, there were a total of 62 dirt route races run at Saratoga, for an average of 1.5 of these races per day.

Often times the New York-based horses that come to Saratoga in their best form from Belmont are horses that have been excelling, in part, to their preference for one-turn races.  At Saratoga, however, this factor flip-flops away from the one-turn specialists who’ve excelled at Belmont, and instead favors two-turn horses that like the routes at Saratoga and other more traditional track layouts.  This adds an interesting handicapping angle in this track change situation to- and away from- Belmont Park. This upcoming move in New York racing from Belmont to Saratoga is one of those pertinent times of year. 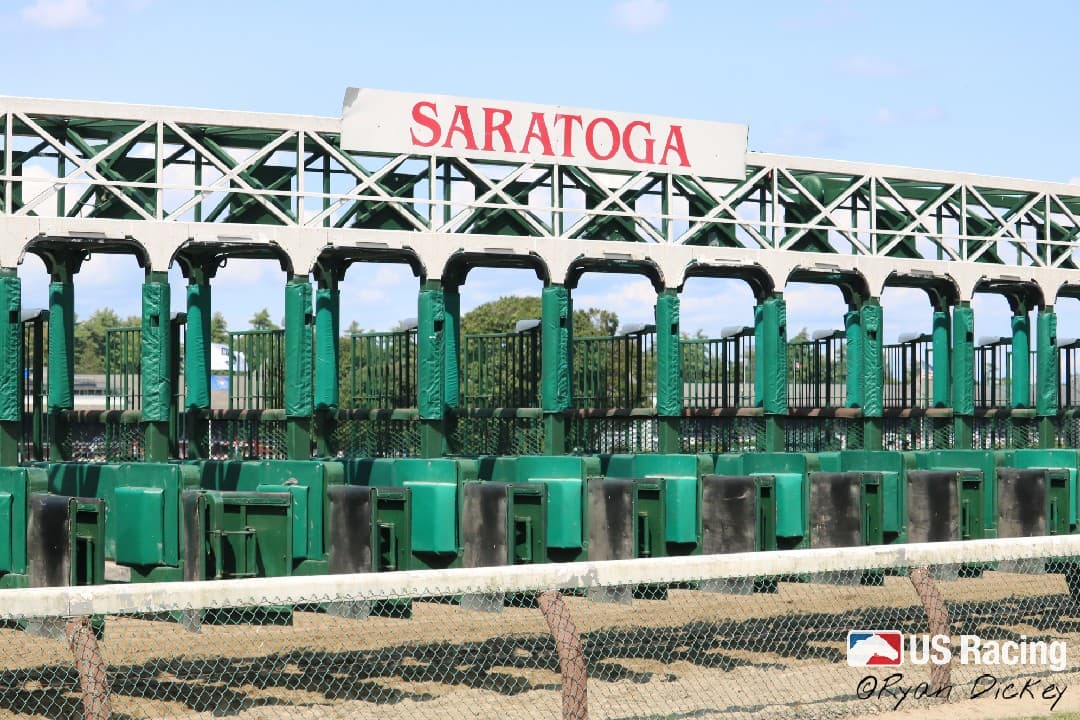 In order to figure out if a horse prefers one or two turns, handicappers need to scan down a horse’s past performances and see where its past route wins and/or highest route speed figures have come from. If you see a horse that has demonstrated its best route form at Belmont going 1 mile, 1 1/16 miles, or 1 1/8 miles, then that horse can probably be termed a “one-turn router.” However, if you see a horse whose best route races came on more traditional layouts such as Aqueduct, Gulfstream, Monmouth, the mid-Atlantic region, or in past races at Saratoga, then you have a potential key play or wake-up horse at Saratoga, particularly if the horse’s past good two-turn efforts came at or near 1 1/8 miles.

Remember also that at Saratoga, because of the track layout, there are no one-mile races and no 1 1/16-mile races. The vast majority of all main track routes are run at 1 1/8 miles.  This creates lots of problems for horses whose best distances are one mile and/or 1 1/16 miles.  Those horses must either stretch out to 1 1/8 miles (perhaps too long), or cutback to seven furlongs around one turn (too short).

Therefore, in addition to looking for two-turn-type horses, you need to work on eliminating horses that just-plain don’t want to go 1 1/8 miles on the dirt. Many horses are much the best at one mile and/or 1 1/16 miles, but those options are closed to them at Saratoga. At Saratoga, bet against the horses that prefer the shorter dirt route distances, and upgrade the chances of horses that are proven at 1 1/8 miles and beyond.

This distance angle goes beyond just Belmont and Saratoga handicapping at this time of year and actually extends to horses running in dirt routes all over the eastern region including Monmouth, Parx, and Delaware. Many of the better New York barns are well aware of this distance angle, and instead choose to ship-off their one mile and 1 1/16-mile dirt specialists to other tracks during the Saratoga meet, because they just can’t win at either 7 furlongs or 1 1/8 miles.

Trainers with lot of resources and/or out-of-town operations have the advantage in this regard, such as Todd Pletcher, Jason Servis, Chad Brown, and Steve Asmussen. These guys will pick out their mismatched distance horses early and ship them to races at Monmouth, Parx, Delaware, or elsewhere before Saratoga even begins. Other trainers with smaller operations, however, without the resources to oversee and run strings of horses out of town, stick around at Saratoga and lose races all season long with these types of horses at 7 furlongs and 1 1/8 miles with horses that should be entered at 1 mile or 1 1/16 miles.

Therefore, during this time of year, bet against horses stuck at the wrong distance at Saratoga from the smaller and/or New York-only stables.  On the flip side, bet on the horses from the barns like Pletcher, Servis, Chad Brown, Asmussen, and others that will run in the 7 furlongs and 1 1/8-mile dirt races at Saratoga, and also hammer them when you see them out of town, especially at Monmouth, when you see them entered at 1 mile and 1 1/16 miles. This is because they’ve already assessed their horses based on distance, and sorted them out to run in races at the tracks where they’ll be most effective.

Many handicapping factors come into play at this time of year when racing and wagering shifts between Belmont and Saratoga. However, there is a method to the madness when it comes to the differences between the types of horses that tend to win route races at each of these two very different racetracks.

With the impending move from Belmont Park to Saratoga fast approaching, we’re coming up to one of those times of the year in New York racing where the difference between one-turn and two-turn races is so important. Pay attention to this important difference, and you will have a distinct edge over the majority of the betting public.

Noel Michaels
Noel Michaels has been involved in many aspects of thoroughbred racing for more than two decades, as a Breeders’ Cup-winning owner and as a writer, author, handicapper, editor, manager and promoter of the sport for a wide range of companies including Daily Racing Form and Nassau County Off-Track Betting.