Hall of Fame trainer Steve Asmussen has allowed assistant Scott Blasi to do most of the talking this week, but now it’s time for two of his star attractions, Midnight Bisou and Mitole, to step up and speak for themselves in their respective Breeders’ Cup races on Saturday at Santa Anita Park.

While the $6 million Classic (post time 5:44 p.m. PT) is the marquee event on Day 2 of the 36th Breeders’ Cup, Midnight Bisou attempts to complete an undefeated season in the $2 million BC Distaff a few races earlier (4 p.m. PT) and make her claim for Horse of the Year honors.

Mitole, meanwhile, looks to solidify his status as the nation’s top sprinter in the $2 million BC Sprint (2:36 p.m. PT).

Asmussen’s other starters Saturday are Engage (also in the Sprint) and Snapper Sinclair (Dirt Mile).

Midnight Bisou was the 6-5 morning-line favorite in what has been whittled down to a field of eight following two scratches – Landeskog earlier in the week, and Imperial Hint early Saturday. Imperial Hint was 4-1 on the morning-line.

Midnight Bisou, who will be ridden by Hall of Famer Mike Smith and leave from the No. 4 post, is 7-for-7 this season with three Grade 1 wins on her resume. Smith is looking for his sixth win in the Distaff. The 4-year-old filly was third in last years’ Distaff behind Monomoy Girl and Wow Cat. 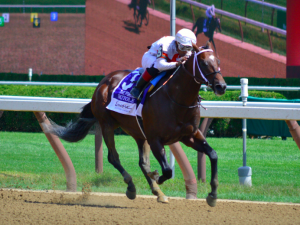 Wow Cat, trained by Chad Brown, is back again for another try. Other challengers include Blue Prize from Argentina, a 6-year-old mare who defeated BC Classic entrant Elate in the Spinster (G1) and Paradise Woods, winner of the Zenyatta (G1) in her most recent race for California-based trainer John Shirreffs.

Mitole takes a 5-for-6 record into the six-furlong Sprint. The 4-year-old colt will be ridden by Ricardo Santana Jr., and leave from the No. 4 post. Among his impressive wins: the Metropolitan Mile (G1) and the Forego (G1) in his most recent start.