All Systems Go for Imperial Hint in Mr. Prospector at Gulfstream

It’s T-minus and counting to liftoff for the “Little Rocket,” and Imperial Hint’s connections hope this time the launch will go off without a hitch in Saturday’s $100,000 Mr. Prospector (G3) at Gulfstream Park.

Raymond Mamone’s Imperial Hint has given a big boost to the career of trainer Luis Carvajal, Jr. But the 6-year-old son of Imperialism, who established himself as a serious horse during his sophomore season, was scratched the morning of the Breeders’ Cup Sprint (G1) on Nov. 2 with a minor foot injury.

As if that wasn’t enough bad luck, the horse became extremely sick on a 2017 trip to Dubai and was unable to run in the Dubai Golden Shaheen (G1).

He’s back again from his latest setbac 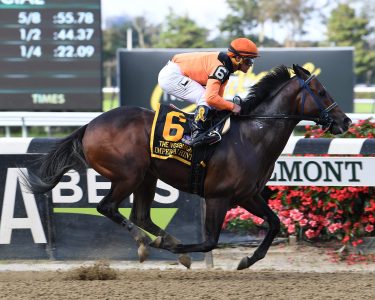 k and it’s all systems go for the 7-furlong Mr. Prospector.

“He looks great, but he looked great, too, before the Breeders’ Cup. It was really disappointing but it’s something I want to put behind me. That’s in the rearview mirror,’’ Carvajal said. “I’m only looking forward because otherwise I get really upset.”

“Those works are great. This is a horse who always gives his best. My assistant trainer, who is also his exercise rider, said he just sat on him without even asking him to move. He’s 6 years old and will be 7 soon, so to see that he still has that fire in him gives me a good feeling. To see him work that way and be so happy to go to the track, it’s great and I can’t ask for anything else,” Carvajal aid. “I can’t wait to see him race again, even though it’s seven-eighths. I wish it was three-quarters. He is definitely a specialist going three-quarters, but he won at seven-eighths at Laurel [in the 2017 General George (G3)]. I have no doubt he can do seven-eighths.”

Imperial Hint, who has bankrolled $1,925,455 while compiling a record of 23 14-2-3, saw his last action three months ago at Belmont Park. But what an effort that was as the superior sprinter took the Vosburgh (G1), and the win followed a Saratoga track record-setting [1:07.92 for 6 furlongs] score in the Vanderbilt (G1) in late July. Moreover, both of those impressive wins were repeats (2018-2019) in the Vanderbilt and Vosburgh, which are among the most prestigious sprint races.

“I’m really looking forward to bringing him back,” said Carvajal, who awarded the return call to Javier Castellano. The four-time Eclipse Award-winning rider has been aboard Imperial Hint in most of his races and was at the controls for all four of the Grade 1 wins in the 2018 and 2019 Vanderbilt and Vosburgh. “Now it’s up to the racing gods, and to Javier.”

Racing luck may come into play on Saturday because XY Jet will be waiting for him in the starting gate again, along with four others in what is a small but exceptionally deep field of six.

XY Jet won the Mr. Prospector in 2015 and again in 2017 for trainer Jorge Navarro and co-owners Rockingham Ranch and Gelfenstein Farm. The 7-year-old hasn’t competed since taking the Dubai Golden Shaheen on March 30, and Imperial Hint finished third in that contest. But Carvajal is not intimidated.

“This horse is taking me on a great journey. I hope we keep going,” he said.