A ‘Win and You’re In’ Saturday at Keeneland, Belmont 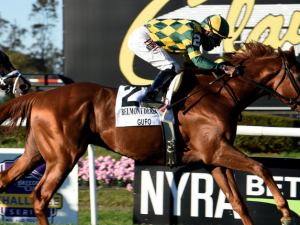 Had the Preakness been run in mid-May, as usual, Pimlico would have been the epicenter of the racing world. Instead, on the first Saturday in October most of the country’s top thoroughbreds, riders and trainers were elsewhere, looking toward the Breeders’ Cup.

Even though funky Old Hilltop staged an all-stakes, 12-race card, only the Preakness (G1) showcased significant horses. At Keeneland, four “Win and You’re In” stakes, two on grass, two on dirt, were prestigious preps for next month’s championship weekend in Lexington, Kentucky. In New York, the Belmont Derby Invitational guaranteed the winner a spot in the Breeders’ Cup Turf.

There were no marquee names in this race, and Inthemidstofbiz was among the least known. Not many were familiar with her trainer, Cipriano Contreras, either.

The daughter of Fed Biz didn’t look like much on paper, so she was disregarded at 13-1 odds. Then she cruised to a three-length win that will send her to the BC Filly & Mare Sprint. The 7-5 favorite, Sneaking Out, was second.

Martin Garcia, an exercise rider and occasional jockey for Bob Baffert, stalked in third before moving on the turn. Inthemidstofbiz paid $28.20 after being timed in 1:09.84.

Uni, last year’s female grass champion and Breeders’ Cup Mile heroine, didn’t look like her old self in her two other races this year, finishing third and then seventh, beaten by a total of 9 3/4 lengths. Had age caught up to her at 6?

The stretch-running mare recaptured her form by surging past her stablemate, even-money favorite Newspaperofrecord, in deep stretch and beating runner-up Beau Recall by a length. Trainer Chad Brown won the First Lady for the third year in a row and for the fourth time overall.

Uni, ridden by Joel Rosario, paid $6.80 after a mile on firm ground in 1:34.90, about two seconds slower than her First Lady victory last year. It was her eighth win in 11 starts at the distance. She earned a berth in the 1 3/16-mile Filly & Mare Turf but seems more likely to defend her title in the Mile.

“I was so stressed out,” co-owner Sol Kumin said. “Chad said in her last two breezes he felt like she was circling back to the form she had last year. So we were hopeful, but until you see it, you just don’t know.”

Trainer Brad Cox always has thought highly of Essential Quality, who validated his opinion by dominating a Grade 1 in only his second start. The 9-5 favorite blew it open in the stretch and coasted to a 3 1/4-length win over 52-1 shot Keepmeinmind.

Calibrate, the 2-1 second choice, never got involved and finished seventh, 13 1/2 lengths behind.

“We’ve had some very nice 2-year-old fillies,” Cox said, “but he’s our first 2-year-old colt to win a Grade 1. He means a lot to us. He’s showed us from day one that he’s special.”

One of the best grass races on the American calendar provided a 14-1 winner with foreign intrigue. Ivar, a Brazilian-bred by way of Argentina, blasted home late to thrill his trainer, Brazilian transplant Paulo Lobo. He was a length ahead of Raging Bull as he improved to 5-for-7 lifetime.

“You know how hard it is to win a Grade 1, especially here at Keeneland,” Lobo said. He hadn’t done that since Pico Central won the Vosburgh at Belmont Park in 2004. Two years earlier, Lobo pulled an upset with 20-1 Farda Amiga in the Kentucky Oaks.

“I was all smiles turning for home,” Talamo said.

The scratch of Domestic Spending made Gufo the horse to beat, and nobody could. Gufo surged in mid-stretch for Junior Alvarado on the way to a length victory over No Word at Belmont Park.

The son of Declaration of War was timed in 2:02.75 and paid $4.90 after surviving an inquiry in his fifth win in his last six starts. He’s 5-for-7 for trainer Christophe Clement.

Against all odds, Otter Bend Stables has a ticket to the 1 1/2-mile BC Turf with the only horse it owns. Clement, however, was noncommittal about going.

“I’m not sure,” he said, mentioning the 1 1/8-mile Hollywood Derby for 3-year-olds on Nov. 28 at Del Mar as an alternative. “I’ll have to talk to the owner and see how the horse comes out of this.”