7 Points for Achieving ‘Profound Knowledge’ at the Track

William Deming is known for emphasizing continuous improvement as a management consultant, rather than making changes after the fact. This same approach can help your handicapping and improve your profitability at the track. 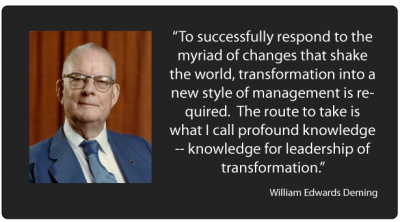 Deming is known for developing what he called the system of Profound Knowledge, which was based on 14 principles that he offered to improve the effectiveness of a company. You can apply some of Deming’s principles to your day-to-day handicapping.

In my many nights of gracing the second floor of the old Meadowlands grandstand, there was a regular we called Trendy Travis. Travis was always using a new system or method of handicapping. He was the guy who would buy whatever tout sheet was available or system he could find cheap in the back of the Daily Racing Form or in an advertisement in American Turf Monthly. Every week Travis had a new angle that was “sure-fire to win” of he’d get his money back.

Did Travis ever win? Sometimes. More times than not he’d have a good day occasionally which confirmed to him the system was working until he moved on to the next best thing he found. His handicapping never improved as he was too quick to believe the shady looking guy selling a tip sheet or that guaranteed system were going to make him money fast.

Creating the consistency of purpose is arguably the most important key of the points made by Deming. Having a long-term plan is essential for producing a quality product or handicapping consistently. This approach keeps you from reacting with short-term solutions which may work on a given day, but not in the long run. Predict and prepare for the challenges and obstacles you are likely to face in the future with the goal of always getting better.

Trendy Travis would scoff at those of us who sat there patiently and played our systems. Some nights we would have several plays, other nights only a few. He could not wrap his head around the fact that we were in this for the long haul. We knew there would be a few rough patches but overall, we would come out ahead as we kept working our system and making improvements.

Every racing day offers new chances and challenges. As handicappers, we must be open to making the continual changes as the game changes. Without change, our bankroll will never sustain itself. Embrace that what works today may not work as well in the future. Embrace that you will need to adapt to the game and commit to that strategy.

While Trendy Travis was burning through different tip sheets and a new system every couple of weeks, the rest of us were constantly looking to poke holes in our own thinking and tweak our systems. A great exercise that some of us regulars would do is to share our picks on a given race and have someone else ask why we thought that was the most likely outcome or “what if” something else were to happen.

What was the result of these exercises? We all learned where we potentially had problems in our own handicapping. It allowed us to take the blinders off and see the bigger picture in each race.

I have never met a handicapper that has figured out every aspect of the game. Anyone who tells you that they have is lying. We can all always do better.

4 Institute training on the job

While simulcasting from the Meadowlands there was one regular who only played the trot races during the harness meet. Lamont was savvy when it came to trotters but had no love for pacers, but since trot races make up only a few races on most cards his action was severely limited each night. Spending as much time as he did at the track, he could have taken advantage of the time to watch the pacers and start to learn more about the trainers and how the pacers differed from the trotters.

Don’t be Lamont. Take the time to learn something new. Find a new angle or understand how you can apply your system to other race conditions. It will help you diversify your betting and if nothing else, keep your mind sharp.

When you are handicapping do you ever get overwhelmed? Do you ever feel like there is information that you wish you had that would make your life easier?

You are not alone. Nothing is worse than downloading the race card for your favorite track and feeling a time crunch or clueless what to do about the horses shipping in from the Midwest. If you are handicapping too fast you will cut corners and miss something obvious. If you dismiss that horse from the Midwest, it will bite you in the butt later. What can you do?

You need to triage the races to what you feel are the best betting opportunities. You need to spend a few bucks to get the data you need to not half-ass it when you need to compare various tracks.

No one wants to have their boss at the track, but you can be your own boss.  Having a helicopter view of your handicapping means that you are not missing anything that is obvious, and you can delegate some tasks as needed to you can focus on your handicapping.

We’ve all seen an early speed horse that does miserably when tasked with jumping up several steps in class or a formerly classy horse who is on the downward spiral and can’t draw on that back class when they face low-level claiming company.

Horses in a race are interdependent upon each other. One frontrunner deviating from what you think he will do in a race will disrupt the pace that you predicted. While you should look at all the factors within a race, you need to remember to break down the barriers and weigh them all against each other to get a complete picture of how the race will set up.

During my many nights at the Meadowlands one fanatical handicapper was focused on making a certain amount of money each day. Fernando was looking to bank $100 each day at the track. On the rare occasion he was successful, he would stop playing and leave once he hit his target. He would craft his plays around trying to be ahead by $100. This caused him to take risks he shouldn’t have and pass on opportunities he should have taken. He would force action on days when he should’ve watched the races instead and would pack up on days when his best opportunities still lied ahead.

Targets and goals have their places. Setting milestones for collecting data or finalizing your analysis are fine. When it comes to betting and wagering, targets cause you to make errors. Focus on the quality of your plays, not the quantity. Take the time necessary to ensure you are handicapping efficiently and the winners will come.

While I doubt William Deming ever put a lot of money on the ponies or had the dream of making his living playing the races, the work he did on improving industrial practices had a profound impact on industry. His work can also have an impact on your approach to handicapping and your bankroll.