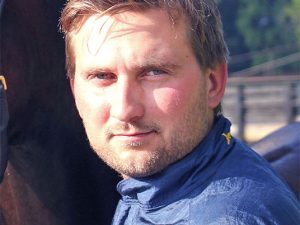 The partnership of Courant Inc., which campaigned 3-year-old trotting stars Greenshoe, Gimpanzee and Green Manalishi S, and conditioner Marcus Melander have been voted Owner of the Year and Trainer of the Year, respectively, by the United States Harness Writers Association.

New Zealander Dexter Dunn, who finished third in earnings with more than $12 million in his first full year in the United States and Canada, was voted the Driver of the Year.

Anders Strom is the principal owner of Courant, which includes partnerships in some of his horses. With Melander as trainer, the “Three G’s” combined to earn more than $3 million in 2019. The team also raced 2-year-old trotting filly Hypnotic AM.

Greenshoe and Gimpanzee each earned over $1 million while winning the majority of the sport’s major stakes for their group – Greenshoe a Dancer division, the Zweig, a Bluegrass division, the Kentucky Futurity, the Sire Stakes crown in New Jersey, and the Kentucky program’s championship; Gimpanzee the Yonkers Trot, the Breeders Crown, the Matron, and the New York Sire Stakes championship. Green Manalishi S added a Tompkins-Geers division, the Simcoe, and the Canadian Trotting Classic; Hypnotic AM won her New York Sire Stakes finale and the Doherty Memorial.

Courant sent out only 16 starters in 2019, but they earned over $3.9 million and placed Courant among the top 10 of leading North American owners.

Melander, just 27 and recent winner of the USHWA’s Rising Star Award, finished fourth among North American trainers ($5.4 million in earnings). Like Strom, Melander is from Sweden. 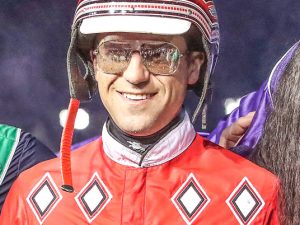 Dunn, who won multiple driving titles in New Zealand, made a smashing debut in his first full season in North America. He won 460 races. He drove pacing colt Bettor’s Wish ($1.6 million in earnings) to a 19-13-6-0 record primarily competing in the “glamour division.” He also won Breeders Crown events with Amigo Volo (2TC) and Manchego (OTM).

There was a tie in the voting for the Stan Bergstein/Proximity Award, which honors the Hall of Fame harness racing writer as well as the 1950 Harness Horse of the Year Proximity.

The award will be shared by New York horseman Joe Faraldo and the Ontario owning/breeding partnership of Al Libfeld and Marvin Katz.

Faraldo, an attorney and owner/amateur driver, is set to begin his 40th year as president and CEO of the Standardbred Owners Association of New York. He’s also been director of the U.S. Trotting Association for over 20 years. He is the chair of the Harness Racing Medication Collaborative.

The partnership of Katz and Libfeld, both involved in southern Ontario real estate, has made an impact on the sport for well over a decade. Their racehorse list includes millionaires Ariana G and Dream Away. They also sold the sport’s first million-dollar yearling, Maverick, at Lexington this past fall. Horses they have owned and/or bred have accounted for the Hambletonian, Kentucky Futurity, Canadian Trotting Classic and other world-class events.

Additional Dan Patch award winners will be announced later in the week, including 12 divisional champions.

The trotter, pacer and Horse of the Year will be announced Feb. 23 at the sport’s annual banquet in Orlando, Florida.