That was easy, wasn’t it?

Two-time champion Monomoy Girl kicked off her 6-year-old campaign with an emphatic victory in the $250,000 Bayakoa Stakes (G3) at Oaklawn Park on Sunday, gliding over a sloppy track and overpowering the opposition with a smooth-as-silk stretch run. 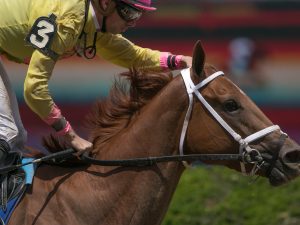 A little over 100 days after the two-time Breeders’ Cup Distaff (G1) winner was purchased for $9.5 million by B. Wayne Hughes’ Spendthirft Farm, et al, Monomoy Girl looks like she may win yet another championship.

The new owners announced a day after the purchase that Monomoy Girl would race in 2021 and continue to be trained by Brad Cox. The 1 1 1/16-mile Bayakoa, delayed several weeks due to frigid weather in Arkansas, was just the start of a final racing season that hopefully concludes at the Breeder’s Cup at Del Mar on Nov. 5-6.

Sent off as the 1-5 favorite and ridden by Florent Geroux, Monomoy Girl raced comfortably in third place behind Finite and Our Super Freak through early fractions of 24.81 seconds for the first quarter, 49.41 for the half, and 1:14.13 through three-quarters. The champ took charge at the top of the stretch and won by two lengths over Our Super Freak.

“When I asked her on the turn, we didn’t go very fast so it looked like the two horses in front of me got away for maybe for a couple of strides,’’ said Geroux. “But as soon as I gave her a tap, a reminder for her to go on, right away she took off like in three jumps. She switched leads beautifully and she kept on going. The trick is not trying to make the lead too soon. But she’s she so good, she can go past those horses pretty easily so [for] the most part is trying and keep he busy going to the wire.”

A chestnut mare by Tapizar, the future Hall of Famer’s record improved to 14 victories in 16 career races [seven Grade 1’s] and boosted her earnings to $4,576,818.

For Cox, who won Saturday’s Southwest Stakes (G3) with unbeaten Essential Quality [an early Kentucky Derby favorite], Monomoy Girl’s successful debut was a relief, especially since she had the outside No 6 post.

“I was proud of her. She ran big. I think just given the post and the way they broke and laid going into the first turn, it set up well for her,’’ said Cox. “She always kind of gets that little wide trip. Nothing really out of the ordinary. It means a lot. I’m very proud of what she accomplished today.”