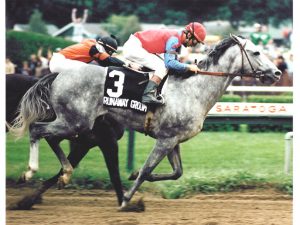 It’s time for the Travers, also known as the Mid-Summer Derby. It was first run in 1864 and this year, will be run for the 150th time. Run at the classic distance of 1 ¼ miles, many believe that only the Kentucky Derby holds more prestige when it comes to races for 3-year olds.

The Travers (G1) was run for the 113thtime in 1982 and that race remains a memorable one. The 1982 Derby winner was Gato Del Sol. As a 2-year old, the horse did nothing to distinguish himself; he did win the Del Mar Futurity, but his only other win in eight starts was a maiden special weight, also at Del Mar.

He took the California route to prepare for the Derby and the Triple Crown. He finished third in an allowance race, and then took second in the San Felipe (G2) before finishing fourth in the Santa Anita Derby (G1). Needing one more race to get into the Derby, he came to Keeneland and finished second to Linkage in the Blue Grass (G1).

He came to Churchill Downs winless as a 3-year old and dismissed at odds of 21-1, but if you’re going to fire, the first Saturday in May is the day to do so and the colt roared down the stretch to pull off the upset in 2:02.40 over a fast track, rewarding his supporters with $44.40 for a $2 win bet.

He skipped the Preakness, his connections wary of the shorter distance, to prepare for the 1 ½ mile Belmont Stakes (G1). With Gato Del Sol absent, a new horse would emerge from Pimlico with a classic victory.

Aloma’s Ruler was a new shooter in the Preakness (G1). The horse was coming off a win in the Withers (G2) at Aqueduct, just one week earlier. He had an interesting 3-year old campaign heading into the second leg of the Triple Crown. He ran on Jan. 27, finishing first in the Bahamas Stakes at Hialeah Park and then did not race again until April 29 when he finished second in an allowance race at Pimlico. The Preakness would be the colt’s third race in 16 days.

In the Preakness, he took the lead and then gamely held off Linkage to win in 1:55.40 over 1 3/16 miles. The next race was the Belmont and Aloma’s Ruler would be headed to New York to meet up with the Derby winner.

The 1982 Belmont will be remembered for many reasons. It would be the first of five consecutive victories for trainer Woody Stephens and would also be remembered for the unconventional path that the race winner took.

Conquistador Cielo was aimed for the Triple Crown, but injuries forced a change in plans. He had run twice in February at Hialeah Park, finishing fourth and first, respectively, in two allowance races, but then was sidelined due to an ankle injury.

He re-emerged in an allowance race, winning at Pimlico on May 8. Stephens was encouraged, but not enough to send the colt to the Preakness a week later. Instead, the horse won an allowance race on May 19 at Belmont.

With two wins under his belt, Stephens felt the horse was ready to run in a big race, but wasn’t sure where to put him. He decided to race the colt against older horses in the Metropolitan Mile (G1) on May 31 at Belmont. Not only was the colt taking a big step up in class; he was also facing older horses, an unusual path so early in a colt’s 3-year old season. Cielo destroyed the field by 10 lengths stopping the clock in a jaw-dropping 1:33, with Stephens declaring afterwards that the colt was fit enough to race back just five days later in the Belmont.

If we thought his Met Mile win was impressive, his 14-length romp in the Belmont was even better. In that race, he dispatched both Gato Del Sol (second) and Aloma’s Ruler (ninth).

To the north was another horse, Canada-bred Runaway Groom. Like U.S. based horses, Runaway Groom was being prepped for a Triple Crown — the Canadian version. Unraced as a 2-year old, he broke his maiden on April 23 at Keeneland; he won an allowance race at Churchill Downs on June 19, prepping for Canada’s most prestigious race, the Queen’s Plate at Woodbine.

In the Plate, he ran second to Son of Briartic; next was Belmont where he won an allowance race and then back to Woodbine where he finished second in the Heresy Stakes.

In August, it was off to Fort Erie for the second leg of the Canadian Triple Crown and this time, Runaway Groom got the best of Son of Briartic when he captured the Prince of Wales Stakes, running 2:38.40 for 1 ½ miles (since 1988, the race has been run at 1 3/16 miles).

For the three U.S based horses, they all went in different directions after the Belmont. Cielo added to his resume by winning both the Dwyer (G2) and the Jim Dandy (G3) on July 5 and Aug. 8, respectively.

Aloma’s Ruler ran three times — winning the Jersey Derby on July 17 and then finishing second in the Haskell (G1) on July 31.

Gato Del Sol regressed, finishing eighth in the Suburban on July 4, before bouncing back with an allowance race win at Saratoga on Aug. 8.

The stage was now set for the Mid-Summer Derby. Horse racing fans were excited to see the three Triple Crown winners face off at Saratoga with very few paying attention to the gray colt from Canada.

Leading up to the race, the big news was Conquistador Cielo being sold for $36 million to a breeding syndicate. The Travers, run on Aug. 21, drew a short field of five on an overcast, dry day at the Spa. Cielo was the 2-5 favorite and in addition to the Triple Crown race winners would be Lejoli, who had run in the Belmont (sixth) and eight days prior to the Travers finished second (to Cielo) in the Jim Dandy.

When the gates opened, Aloma’s Ruler shot to the early lead with Conquistador Cielo right there with him. The pace was quick with fractions of 23.2 and 46.2. While Cielo and Aloma’s Ruler battled, the unknown Canadian sat way back in last place.

After hitting six furlongs in 1:10.3, Runaway Groom began making his move. In the stretch, he still had running to do, but with Cielo and Ruler tiring, he was able to go wide and surge past the Preakness and Derby winners, crossing the line in 2:02.3 for the classic 1 ¼-mile distance. The crowd reaction was one of stunned disbelief and even track announcer Marshall Cassidy was caught a bit off guard.

“Runaway Groom from Canada moves up,” said Cassidy. And, when Groom took the lead Cassidy ended his call with the simple, yet accurate, “Runaway Groom in front.”

For Runaway Groom, that was his high point. He did capture the Breeders’ Stakes, the third leg of the Canadian Triple Crown on the Woodbine turf, and never won another race afterward, going 0-for-2 for the remainder of 1982 and then 0-for-6 as a 4-year old in 1983.

He had a very successful stud career with his babies winning 60 stakes races and 27 graded stakes races. In 18 starts, he had six wins, five seconds and one third and was inducted into the Canadian Racing Hall of Fame in 2001.  He sired through age 28 and later that year (2007) was euthanized due to infirmities of old age.

The 1982 Travers would be the last race for Conquistador Cielo. A chipped bone in his knee was discovered and with the then record $36 million syndicate fee secured; the decision to retire him was an easy one. In two years, he raced 13 times with nine wins and two thirds and though his babies would be considered by most as disappointing, he did sire more than 60 stakes winners. He was euthanized at age 23 in 2002.

I’m not sure where Cielo ranks in the litany of great thoroughbreds, but his Met Mile-Belmont double over five days ranks high on the accomplishment list and is something that will never be seen again. They don’t make horses like him anymore and trainers like the swashbuckling Stephens are also a thing of the past.

Like Cielo, the Travers was also the last race for Aloma’s Ruler. He came out of the Travers with a sore ankle and was retired. He had limited success in the breeding shed; his offspring would only win six stakes races. He died of an apparent attack on an Illinois farm in 2003 at the age of 24. In 13 starts, Aloma’s Ruler posted a record of 7-4-1 to go along with $498,883 in earnings.

Gato Del Sol was the one horse that kept running. After the Travers, he would take the rest of 1982 off, but in 1983, he would run eight times; his only win coming in the Cabrillo Handicap at Del Mar.

In 1984, he raced 10 times with no wins, but did have some moderate successes on the turf. He finished a respectable third to the great John Henry in the Arlington Million and in 1985, at age six, he ran twice, winning the Caballero Handicap at Hollywood Park in his last start on May 18.

He had very little success as a sire and in 1993 was sold to a breeding operation in Germany where his lack of success continued.  Fearful that he might end up in a slaughterhouse, the colt’s original owner, Arthur Hancock III bought him back in 2000 and he lived out his days at the place where he was foaled, Stone Farm in Paris, Kentucky, until he was euthanized due to old age in 2007 at the age of 28.

The 1982 Mid-Summer Derby was a race for winners, and in the end, the Canadian took home the Travers glory.