10 Memorable Moments From Racing In A Tough 2020

In a heartbreaking year in which COVID-19 overwhelmed us, horse racing soldiered on. Despite track shutdowns, scrambled schedules and empty stands, the sport provided a desperately needed distraction and, as always, many memorable moments. Here’s 10: 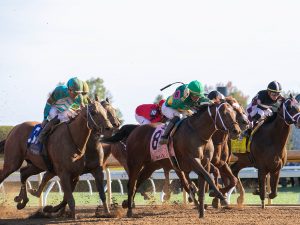 Front-running colt embodied the essence of the thoroughbred — brilliance — as he came within a neck of sweeping the Kentucky Derby, Preakness and Breeders’ Cup Classic. Only Triple Crown hero American Pharoah ever won all three. A lock for Horse of the Year.

Swiss Skydiver became only the sixth filly, and the first since Rachel Alexandra in 2009, to take the Preakness. Slumping Robby Albarado relived his glory days with an off-the-pace move that denied Authentic a classic double.

If the Derby had been run in May, the world’s greatest dirt trainer might have run 1-2-3 with Nadal, Authentic and Charlatan. COVID-19 prevented that unprecedented achievement before injuries sidelined Nadal and Charlatan. Bob Baffert regrouped and still managed to take his sixth Derby and his fourth Classic with a colt many considered a liability at 1 1/4 miles.

He usually trains favorites, but it was bombs away in the Epsom Derby and Breeders’ Cup Mile. Serpentine, a 25-1 shot dismissed as a pacemaker, wired England’s top race by 5 1/2 lengths under Emmet McNamara, who hadn’t ridden a winner since October. O’Brien ran 1-2-3 with long shots in the Mile, in which 73-1 “no hoper” Order of Australia topped a $2 trifecta worth $17,572.

Trainers Jason Servis and Jorge Navarro were among 27 indicted on various federal charges of producing, distributing and administering banned substances to horses. The news broke March 9, only nine days after Servis won the $20 million Saudi Cup, the richest race of all time, with Maximum Security. The $10 million winner’s share has been withheld pending the conclusion of inquiries.

Insanely fast filly rocketed a half-mile in 43 3/5 seconds in back-to-back, 7-furlong Grade 1s, the Ballerina and Derby City Distaff, and missed by a nose of winning both. Rarely has raw speed been so compelling.

Looked like the reincarnation of Ruffian when blasting wire-to-wire in an 18-length demolition of the mile Acorn. The 1 1/8-mile Kentucky Oaks was too far, but Baffert’s latest female star rebounded by crushing the 7-furlong Breeders’ Cup Filly and Mare Sprint by 6 1/4 lengths in 1:20.20, a Keeneland record.

Even if you didn’t have the old guy at 18-1, his 3 1/4-length triumph was the feel-good story of Breeders’ Cup weekend. Irad Ortiz Jr.’s masterful off-the-pace ride finally got the 7-year-old gelding there in his fourth consecutive Sprint.

Future Hall of Famer overcame an 18-month layoff to go 4-for-4, capped by a second Distaff victory for Brad Cox. She’s 13-for-15 with two seconds, about as close to perfect as you can get, and she’ll race next year at age 6.